Why the Thaw Might Not End Your Plumbing Problems

Why the Thaw Might Not End Your Plumbing Problems

The days are getting longer, and the temperatures are slowly warming—and although winter isn’t officially over for a few weeks, we’re already looking forward to more sunshine and less “blah.” We’re guessing you feel the same way—especially if you’re one of the unlucky Harrisonburg plumbing customers who got to experience the “joy” of frozen pipes this winter!

We hate to be the ones to say this, but you might want to hold off on your hooray-for-spring celebration. If you’ve had frozen pipes this winter, the thaw could actually be just the beginning of your plumbing problems. In fact, we get more calls about thawed pipes than we do frozen ones. Keep reading to learn why.

When the water inside your pipes freezes, it expands—putting stress on pipes and joints, which often creates drips and leaks. Unless the pipe actually bursts and creates an obvious crack in an visible spot, you won’t know any of that’s happened until the water thaws. That’s no good. So what should you do?

Thaw frozen pipes as soon as possible. Notice we did not advise you to thaw them as quickly as possible. Many homeowners make the mistake of applying intense heat to a frozen section of pipe to get things flowing fast. Unfortunately, that can cause large chunks of ice to break off and bang their way through the pipe, causing potential damage. Plus, DIY methods of thawing pipes—typically heat lamps, hair dryers, and space heaters—create an electrocution hazard.

A professional Harrisonburg plumber will slowly and safely thaw the pipe and inspect for damage along the way.

If you’re among the lucky ducks who haven’t had their pipes freeze this winter, way to go! Now let’s keep it that way. We posted some tips for preventing frozen pipes a few weeks ago, but to recap:

If the Thaw Creates a Waterfall…

As temperatures warm up, check everywhere for drips or leaks. Inspect your ceilings for evidence of water damage, check under every sink, and pay particular attention to pipes in uninsulated portions of your home, like the basement. If you notice a problem:

In fact, if you had any frozen pipes at all this winter, it’s a good idea to have your entire system inspected. Just because nothing burst this year, doesn’t mean you’ll have the same luck next year. It’s much easier and far less expensive to replace weakened components now than it is to deal with a flood later on.

Have concerns about your pipes? Give us a call today! 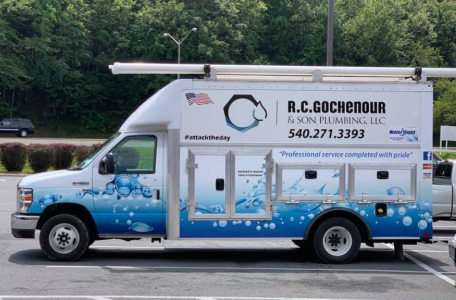 R.C. Gochenour and Son Plumbing LLC is proud to serve the plumbing needs of Harrisonburg and surrounding areas, including communities in Page County and Rockingham County.